Recent news reports have posted a story about a clown “terrorizing” a town in Wisconsin.  With new images coming from the remake of “It” and more instance like this happening every year, seems like a good time to repost this article originally written for Massachusetts Paranormal Crossroads and republished on Tripping on Legends.

For some reason, parents believe clown to be entertaining to young children.  They invite them into their houses and point them out at the circus instead of focusing on the people swinging over their kids’ heads. Bozo was a gentle soul, and occasionally a sad clown seen on a shelf can remind people of a childhood memory that didn’t spark nightmares, but there is something unsettling for many people when it comes to our painted friends. There are adults with real terror towards them, and many others just politely turn or cringe when a clown is even mentioned.

It’s not hard to see why.  They are a contradiction.  They smile and laugh but intrude on our personal space and don’t seem to take no for an answer.  Most of all, they frighten us.  In a recent survey, clowns were ranked just below snakes and spiders as the physical thing people feared most.  Pennywise, the clown from the horror novel It and that toy clown from Poltergeist are just two of the lasting images of terror with painted faces.

It is difficult to say why we fear clowns, but there is something about the makeup and nature of these free spirits that conjures nights alone as a child wondering what exactly was under your bed.

But in 1981 the horror of clowns was real for the people in the Metro area of Boston and soon the fear began to spring up in other parts of the country.  The threat from these clowns, like our unreasonable fear of them, might have been more in our imagination.

Early that spring in certain districts in Boston reports began to circulate of small children being abducted by a man or groups of men dressed like clowns.  It is impossible to trace to its beginnings, but the entire affair lasted several month without a single confirmed attack.  Yet there were dozens of reports.  The reports came mostly from children themselves and they were given enough weight for the Boston Police to issue am official warning in May of 1981.

Most of the reports were similar in content.  A child, varying in age, would report that either he or someone he knew had been approached by a person or persons dressed like a clown.  Usually the child said it was another little boy or girl, often matching a description very much like theirs, who they did not know who fell victim.  Sometimes the clown was nice and offered them something, but more often then not the clown tried to force them into his van.  The physical description of each clown varied.  Often it was just the face that was painted up or the upper body while the lower half maintained a sinister look.  One clown was half naked.  Another had a clown face, but wore a black shirt with Satan on it and jeans.  Most of the reports had the clown owning a black or dark blue fan, sometimes with a ladder on it.

One clown was half naked.  Another had a clown face, but wore a black shirt with Satan on it and jeans.

Reports piled in.  Warnings were issued, but no one could ever back up that anything has actually happened.  Missing children numbers in Boston where actually down, and a few of the adult witnesses of the children who were missing had no reports of clowns.  No clown was ever found with a missing child, nor were any children who had been taken and made their way back home willing to say it was clowns that had taken them.The false reports led to clowns being seen everywhere.

Boston was not an isolated incident.  The reports extended themselves East Boston, Cambridge, Everett, Brookline and then to Canton and Randolph, but it was when the story hit nationwide that people took greater notice.  Providence, RI had an explosion of Clown related abductions followed closely by Kansas City and then by other parts of the country.  It was like the clowns were taking over the country and they wanted our children.  After hundred of reports, not a single clown was arrested and eventually the hysteria died down.

There were lasting effects though.  Someone heard I was doing this report and said he remembered the reports in Everett from when he was a kid.  He was forced to walk with his little sister every time he left the house and his mother and grandmother recited stories of the reports as if any moment the clown would come through the door and take them.  Another reported she loved clown growing up until the Clown Craze of 81.  She now fears even the sight of them, and traces her fear back to walking home from school expecting one to come out of the bushes or come out from under her bed.  My cousin had experiences with the clown legend as well.  At the time she was living with our grandparents, and she vividly remembers making a huge sign that read “Beware of the Clowns” and hanging it by the fence in their front yard. After 911, the legend surfaced again, this time combining two urban legends in one. The clowns were now in the malls of America ready to place bombs in stores and take children out to their white vans.  These reports more than doubled around Halloween.

There is little doubt the attacks were the product of overactive imaginations.  Master folkorist Jan Brunvard reports one child reported a well-armed clown pulled an Uzi out and fired before the little tyke was able to beat up the full grown attacker and force him to run away.  While this might be an extreme case, it seems amazing that juvenile witnesses would carry so much weight.  A few years later the country would be rocked again by similar children reporting they were being used in satanic rituals and then sex abuse scandals a few years after that, but this outbreak might have a more concrete explanation. Only months before the first incidents were reported the serial killer John Wayne Gacy was convicted of murder.  The most famous pictures of Gacy, and the ones more often seen on news reports, was him dressed a clown, ready to entertain children.  He is probably not the soul reason for the reports, but kid’s heads have a strange way of processing information, and parents were undoubtedly influenced by the reports.  Mix this with the ever present fear of clown most children have.  Hysteria was reinforced by other false tales and a legend was born.

I came across another odd aspect of the story a few years ago.  While teaching high school in Lawrence, Massachusetts, a few years ago, I had the chance to incorporate the clown legend into the classroom.  The students, born more than a decade after the initial incident, informed me that I was wrong about it only being an urban legend.  Maybe the one in Boston was, but in the early eighties (or a long time ago as they communicated it) clowns had stolen children and killed them.

I shook it off and told them that was the beauty of an urban legend; people always believe it’s true.  They told me they had proof.  Many of them had gone to Robert Frost Middle School, located a few miles away.  Behind the school there is a rock formation with an entrance much like a cave.  The mouth is decorated with graffiti, including pictures of creepy clowns.  The students told me their teachers told them blood stained clothes had been found there back in the day and the police had identified clown, never caught, as the culprits.  Every once in a while a new set of dirty clothes would show up, and sometimes, especially at night, you can go to the caves and hear the cries of the murdered children or see the outline of where their bodies were found drawn in some otherworldly chalk.

As an educator and parent, this makes sense to me.  Scare the hell out of the kids so they don’t go someplace dangerous at work.  I doubt there were ever any murders, and I can almost guarantee it wasn’t done by clowns.  I talked to an administrator at school when I was told.  She had been there for almost ten years at that point and had spent all that time knowing the story. She checked with someone who went further back than her, and that man told her that the story started circulating sometime in the early Eighties.  Neither of them, nor further research, could confirm that children’s bodies were discovered near there. 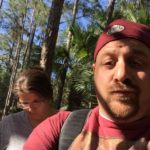