A Spooky Night at the SK Pierce Mansion 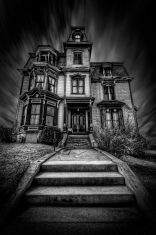 Join the Spooky Crew on Saturday, October 22 as we spend a Spooky Night at the S.K. Pierce Mansion in Gardner, Massachusetts!

This is the famous “Haunted Victorian” that you’ve seen on television and in online articles…now is your chance to investigate it for yourself!

Tickets are $125 each and are limited to just 22 people. We will provide a pizza dinner with snacks and beverages throughout the night, and hours of guided paranormal investigation. Whether you’re a first-time ghost hunter or a seasoned pro, this event will be for everyone! 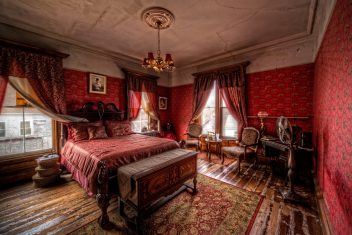 Get your tickets here:

Sylvester Pierce was a wealthy businessman who achieved his fortune as the owner of the S.K. Pierce and Sons Furniture Company. The success of the company and the furniture industry led to Gardner, Massachusetts being known as “Chair City.”

In the late 1880s Pierce decided he would build a mansion befitting a man of his public stature.  The mansion he created was a marvel for its time.  The nearly 7000 sq ft mansion boasted 10 bedrooms and took 100 men a year and a half to build.  Hand carved mouldings and cornices are seen throughout home.  Painstaking detail was used to create every inch of this masterpiece from the master bedroom to the servants quarters.  The guest list was one for the ages as the home is said to have hosted the likes of former President Calvin Coolidge, Minnesota Fats, Bette Davis, P.T. Barnum and Norman Rockwell, while also serving as a well-known meeting place for the Freemason Society.

Pierce, his wife Susan, and their son had big dreams when moving into this one of a kind mansion, but their dreams fell apart when Mrs. Susan Pierce mysteriously succumbed to a bacterial illness just weeks after moving in.  After a year of mourning , Pierce married Ellen Pierce, a woman 30 years his junior, with whom he had two more children.  Pierce passed away in 1888 leaving behind his new wife and their three sons.  When Ellen Pierce passed away years later, the three sons bickered constantly over ownership of the mansion and the chair business.  The Great Depression ended up stifling the business and eventually SK’s youngest son, Edward, took control of the mansion.

The mansion underwent hard times as the family fortune dwindled.  Edward turned the mansion into a boarding home where some unsavory activity such as drinking, gambling, and prostitution became the norm.  There were even tales of murder.  It is said that a prostitute was strangled in the infamous red bedroom on the second floor while another boarder, a Finnish immigrant named Eino Saari, burned to death in the master bedroom in 1963.  Some believe that this was a spontaneous combustion as there was little damage to the surrounding room.  Another story has a young boy being drowned in the basement.

Over the subsequent years, guests of this mansion have suggested that it is rich with paranormal activity.  The ghosts of S.K. Pierce himself, Susan Pierce, Edward Pierce, as well as a nanny named Mattie Cornwell, a gentlemen named David who some believe to have been the red room strangler, the prostitute who was murdered in the red room, a young boy, a younger girl who was perhaps the granddaughter of Pierce, Eino Saari, and some unnamed dark entities in the basement have been described as some of this mansion’s many ghostly residents.

Guests have experienced everything from voices, chanting, full body apparitions, moving furniture, screens flying off windows, slamming doors, the sounds of footsteps on the stairs and halls, sudden temperature changes, foul odors, shadow people, and an ominous lions roar which can shake the house, which many believe is the former Mr. Pierce imposing his displeasure with the current state of the home and its residents.  Others have felt the pressure of hands actually pushing them.  One visitor felt that a presence was attempting to push her down the steps while another was almost forced out of a third floor window.  Paranormal experts have said that the entities in this mansion are the “most advanced” they have ever seen, as they are capable of harnessing electrical energy and converting that power into the ability to move large objects and impose their will physically on their current surroundings.

Previous home owners have taken great strides in uncovering the secrets of this home.  Well known paranormal groups such as those from the TV shows, Ghost Hunters, Ghost Adventure, and My Ghost Story have visited this home to learn more about these possible hauntings.  The stories of this home have also been captured in books such as Haunted Massachusetts and Bones in the Basement: Surviving the SK Pierce Haunted Victorian (a book written by the Joni Mayhan, chronicling the previous owners’ experiences in the mansion).  The house has been cited as the #2 most haunted house in Massachusetts and the 9th most haunted house in the USA.

EVENT POLICY: Tickets are non-refundable unless the event is cancelled due to unforeseen circumstances. – No one under the age of 13 admitted. Ages 13-18 only with parent or legal guardian. – No alcohol will be served or permitted during the event. – The events are for entertainment purposes only. We can’t guarantee you will have a paranormal experience. – The ticket price does not include your travel, rental car, lodging, or other travel expenses. – You are responsible for your own transportation to and from the event. – We reserve the right to refuse admittance to attendees who are visibly intoxicated or under the influence of drugs. – We reserve the right to remove attendees from the event if their behavior threatens the safety of the location or other guests. – All attendees must sign a waiver releasing Spooky Southcoast, the individuals involved and the location from any and all liability in case of accident or injury. – All attendees must sign a release allowing Spooky Southcoast, the individuals involved and the location to utilize their likeness, evidence and other media in future promotion. – Spooky Southcoast, the individuals involved and the location are not responsible for any personal property that is lost, stolen or damaged.