We’re joined in studio by Scott Porter and over the phone by Robert Lopaka Kapanui of Mysteries of Honolulu, as we discuss Stephanie and Porter‘s recent trip to Hawaii and the weirdness that entered their lives both while there and in the weeks since. 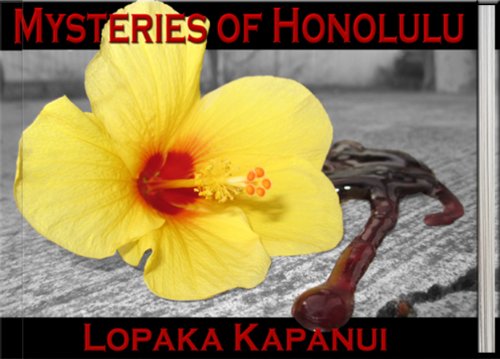 Lopaka Kapanui is a native Hawaiian storyteller, writer, actor, kumu hula, cultural practitioner, former professional wrestler, husband, father and grandpa. Sometimes known as “The Ghost Guy,” Lopaka makes a business of leading guests into some of the darkest, spookiest places on the island of ‘O’ahu. Born and raised on ‘O’ahu and spending his childhood summers on Hawai’i Island and visiting Maui frequently with his family, Lopaka grew up hearing all the old legends and ghost stories from his kupuna, his elders.

His family’s legends, history, customs and protocol were passed down to Lopaka in the traditional Hawaiian way, through mo’olelo, from mouth to ear, sitting at the foot of his Mom and his Aunty as they related the lessons to him. He learned of the night marchers who only appeared during a particular moon phase. He learned why it is important to never share food with anyone while walking through a haunted place. He also learned the significance of the proper prayers to offer in ceremonial blessings, to enter or leave a sacred place, to ask for protection or forgiveness, or before gathering greenery in depths of a Hawaiian forest, and the importance of intent. Additionally, he was taught that the responsibility which would come with what he was going to inherit would have to, one day, be passed down within his own family.

“E mau ana ka ‘ike,” was what his mother and aunt would always say at the end of each lesson, “The knowledge must continue.” In March 1994, Lopaka followed a friend’s recommendation and went on a ghost tour with famed historian and author of “Obake Files” and the “Chicken Skin” ghost story series, Glen Grant. At the time, he had no idea that he was about to meet his future mentor. Lopaka quickly realized that the stories that Glen told were the same tales of legends and history that his own kupuna shared with him.

Glen was the original creator of ‘O’ahu’s first ghost tours, setting the stage for the future of all other ghost tours in Hawai’i. Glen was adamant about researching every story, every fact and instilled this ethic in Lopaka as well, accepting nothing less than excellence.

“If I make a mistake or get something wrong, it’s not that bad because I’m ‘haole.’ People expect me to make mistakes,” Glen said, “But you, Lopaka… you’re Hawaiian, you’re from here and you’re not allowed to make those same mistakes.”

After Glen’s passing in 2003, Lopaka carried on the business at The Haunt for a short time and then created his own tour business, first as Ghosts of Old Honolulu as a tribute to Glen and then Mysteries of Honolulu. It is through Mysteries of Honolulu that Lopaka followed in the footsteps of his close friend and mentor and honors the man who meant so much to him.

Inspired by Glen’s constant encouragement to do more and be more, Lopaka began writing, chronicling the supernatural experiences of himself and others. Lopaka’s business transitioned into Mysteries of Hawai’i, expanding his storytelling and tours to the neighbor islands, encompassing the legends and mystery of this island state.

After acquiring the trade name Chicken Skin, Lopaka, along with his wife and business partner, Tanya, look to share the legacy of Hawai’i on an even greater level.

Having been in the storytelling business for more than 20 years, hundreds of people have come forward to share their own stories with Lopaka as well, making him a repository of sorts for some of our islands’ spookiest tales.

Sharing more than just Hawaiian ghost stories, Lopaka shares his knowledge of the history and legends of ‘O’ahu and Hawai’i.